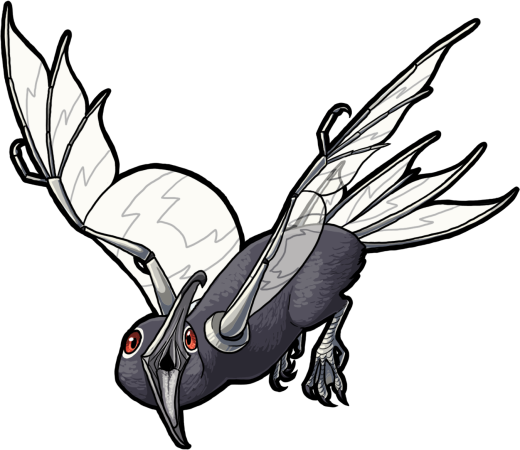 Based on their resemblance to Earth's seagulls, one might expect the Glass-Winged Mew to be a hardy generalist found along the coast. And this expectation is correct: the noisy squawks of these birds are a near-constant along the shoreline. Glass-Winged Mews primarily skim the surface of the water for any small creatures that swim too far up, and pick at both metallic and biological scraps that wash up along the shore. They live in flocks, and are very sociable creatures that nest in and around cliffs and spend time preening each other.

The biomechanical systems in Glass-Winged Mews are an area of great interest, as their wings and tails grow with the bird, but stay properly proportioned. They appear capable of processing and incorporating scraps of metal and silicate into their bodies as they grow. Researchers are attempting to discover just how these complex systems are integrated into the birds, and speculation about how they became this way runs rampant. Progress is somewhat hindered by the fragility and rapid decay of their systems in dead specimens, and the constant annoying squawking from live ones.