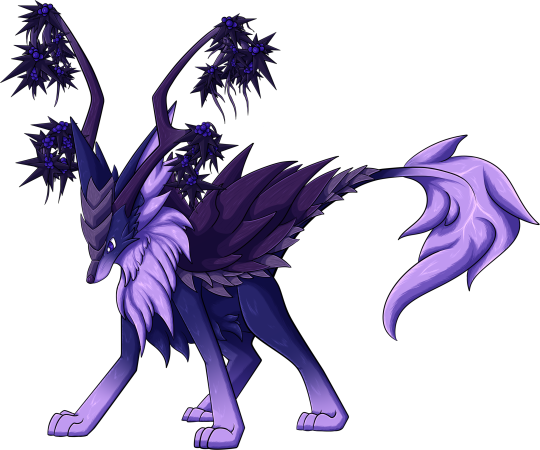 The Barkback is a doglike prey animal that seems rare only due to its ability to hide. This strictly herbivorous mammal not only has thick plates of bark forming an interlocking shell on its back, but also is covered in plant matter—for most of the year, these plants lay dormant, but when "in bloom", females (called does) carry flowers in their ears and manes while males (called stags) have berries hanging from their branch-like antlers. They are social creatures, forming herds as large as food availability will allow. However, they are extremely skittish, and the approach of an unfamiliar creature will cause it to curl up, protected by its shell.

Barkbacks grow slowly, and stop entirely shortly after reaching adulthood, so that they will not outgrow their shells. Stags are larger and sleeker, with both bigger antlers and plates, and are slightly more prone to meeting predators with a returning attack or by escaping than a doe would be. Does, in contrast, are small and compact, slower compared to the quick-to-flee stags. The plants that grow on a Barkback are considered edible, and the berries in particular make for a healthy snack packed with nutrients, while the flowers make a nice herbal tea. Barkback pups have been seen feeding on the plants growing on their parents to no ill effect. Despite their flighty natures and high defensive properties, however, Barkbacks are preyed upon by many predatory creatures they share their habitats with, such as the Lutreo.