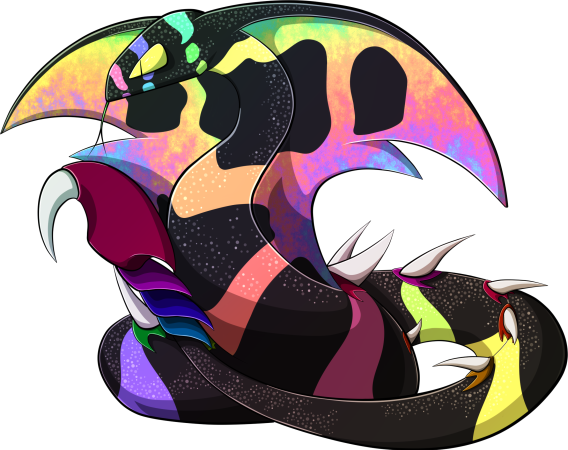 The Aceranguis is a rather common snake in Crop Circle Canyon, much to the detriment of unprepared exploration teams. It is highly venomous, delivering its poison via both its fangs and its scorpion-like tail stinger. In addition to injecting venom, it is able to spray it from its fangs several meters away with incredible precision, aiming for the eyes or visibly open wounds of its attacker. The venom is acidic and corrosive, appearing to do damage to envenomed tissue by directly melting it than relying on neurotoxic or haemotoxic properties. If left on otherwise healthy skin for more than about an hour, it can cause necrosis, but the real danger comes from its tendency to cause permanent damage to eyes and muscle tissue.

Aceranguis are primarily defensive in the face of a threatening predator or researcher, and prefer not to waste their venom. If cornered, however, they have been known to chase and actively pursue their attacker until it bites, stings, or loses its quarry. Their banded patterning serves both warning and camouflage purposes; in shaded sand and rock, the black striping can help it blend into outcroppings of rock and shrubs, while under direct light the bright contrast of its markings against black, as well as the glittering of its scales, can warn a curious predator of danger. Their scales are shiniest just after a shed, and females are typically more glossy than the males, being the ones to attract male snakes for courtship and breeding.